Nina Pops creates works of constructive abstraction: cut outs, aluminum panels and canvases. However, despite their formal rigor, they do not seem cold at all, but rather playful and optimistic.
The Cut Outs are forms that embody a unique feature in contemporary art. Namely, they emerge from a cut. This sharp cut is the basis for the single surface that becomes an element within Nina Pops’ pictorial cosmos. Such differently cut out surfaces are woven together in the paintings like two-dimensional mobiles. In the process, the picture support is not covered at all, but often forms a kind of space in between the various color elements, creating a three-dimensional impression.
What is special about the colored elements in Nina Pops’ pictorial cosmos is their luminous color power. The artist produces the colors herself in the studio and thus has the possibility to control the density of the pigments accordingly. Often the optimistic colors predominate with her, which give the images a positive aura. 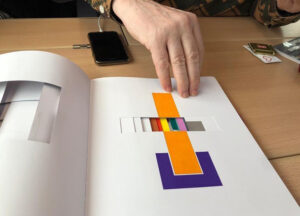 The basis of her work are the sketchbooks. In such sketches, forms are clarified, which are further processed in cut outs, aluminum panels and canvases.